Thai villagers said the SAC fighter jets flew 5kms into Thailand territory three times. A local driver told Karen News “it was scary, they made three big circles before crossing back into Burma to fire rockets.”

The SAC fighter jets entered Thailand’s air space over Phop Phra district around 11;30am on Thursday morning. Thai villagers said the sight of foreign jets over their village and explosions as they fired on villages across the border was terrifying.

Local Thai Facebook pages echoed the anger of residents in Phop Phra district and of fleeing Karen villagers from across the border.

A Karen villager described to Karen News how the airstrike destroyed buildings and pieces of concrete were flying everywhere.

“The plane flew so low when they shot, I think I’m hit. This is not a war zone. We’re scared, we’re angry. We don’t know what to do – stay inside the building, run outside and hide…we’re scared …so scared.”

Karen villagers said Thai soldiers and villagers helped them to safety on the Thai side. Villagers told Karen News at 2am on the 29th June a 21-year-old man was killed by a Burma Army mortar shell that landed on the Thai side of the border. The Karen villager pointed out; “this is the 10th time they [Burma Army] fired rockets to our side. We stayed in a bunker, we’re scared, our children are crying with fear, we’re lucky Thai villagers helped us.”

A village teacher told Karen News Thai soldiers were visibly angry at the intrusion of the fighter jet and of Burma Army munitions landing on Thai territory.

“Thai soldiers were upset and said how dare they [Burma Army] break the rules. Thai people are now scared to stay in their own homes.” 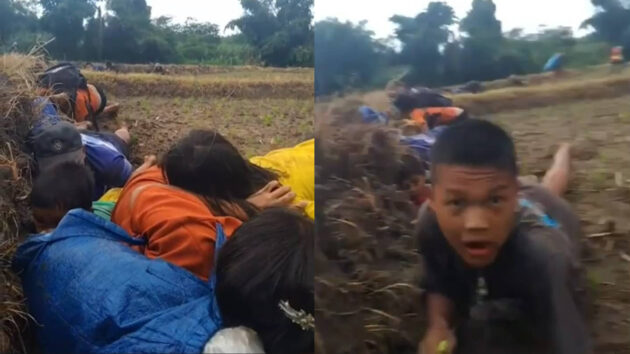 A villager explained to Karen News the Burma military and its army has no respect for anything – people, religion or laws.

“We heard when they [Burma Army] entered the temple they kicked the monk’s food off the table and thrashed the temple.”

The village pointed out that on Wednesday, 29t , the Abbott from Mawtha Monastery was killed instantly when hit by shrapnel from a Burma Army rocket.

“I spoke with him just before he was killed. He was a good monk. He encouraged us to work and be better people. It’s so sad, why do they [SAC] want to fight and kill people?”

Today, a U Kray Hta villager confirmed to Karen News that two monks and a civilian were killed in the latest Burma Army attacks and the attacks are still ongoing.

“They’re still attacking us with air strikes. It’s already seven times and it’s not even noon. We can clearly see drones overhead. We’re worried. We don’t know what will happen. We need the airstrikes to stop.”

The Bangkok Post confirmed in a news report that a fighter entered Thai air space on the 30th June.