Colonel Moe Phyu, a senior officer with the Karen National Liberation Army, served 37 of his 62 years in the Karen revolution, died on May 11th from complication related to hypertension and diabetes.

Colonel Moe Phyu started his military career as a private in the KNLA, but quickly rose through the ranks to become a Colonel with the position of G-2. His army comrades said that his death will be a huge lost for the Karen revolution and for the Karen people.

Colonel Moe Phyu was a key member of the KNU delegation in the second round of ‘peace-talks’ between the KNU and the Burma government.

Speaking to Karen News, KNLA Major General Pilah Sein, talked highly of Colonel Moe Phyu and how he had always fulfilled his duties, even at the end of his life.

“Colonel Moe Phyu was a very skilled person and he gave his all for his people. He was a member of the KNU delegation during the second round of meeting between KNU and Thein Sein’s government. Col. Moe Phyu drafted the positions of our fighters and those of the Burma Army troops during the ceasefire period. He finished preparing those documents before dying. His death is a huge loss for all of us.”

KNLA G-3 Major Tamla Thaw said Colonel Moe Phyu was respectful to all he came into contact with.
“G-2 [Col. Moe Phyu] was a honest man. He didn’t discriminate between senior officers or rank and file soldiers – he was friends with all.”

Naw Myaing Poe, a health coordinator with the Karen Women’s Organization was a schoolmate of Colonel Moe Phyu and said that even though Moe Phyu was from a wealthy family he was prepared to give all his privileges up to join the Karen revolution.

“He was the second son of three siblings. He has one younger and one older sister. Right after he finished school, he joined the Karen revolution. His sister was an engineer at that time and was fired from her work in retaliation for her brother joining the revolution.”

“He was very patriotic. We have to continue Moe Phyu’s unfinished work for our people. We hope to see new leaders like him emerging from our community. Moe Phyu was a very honorable leader.” 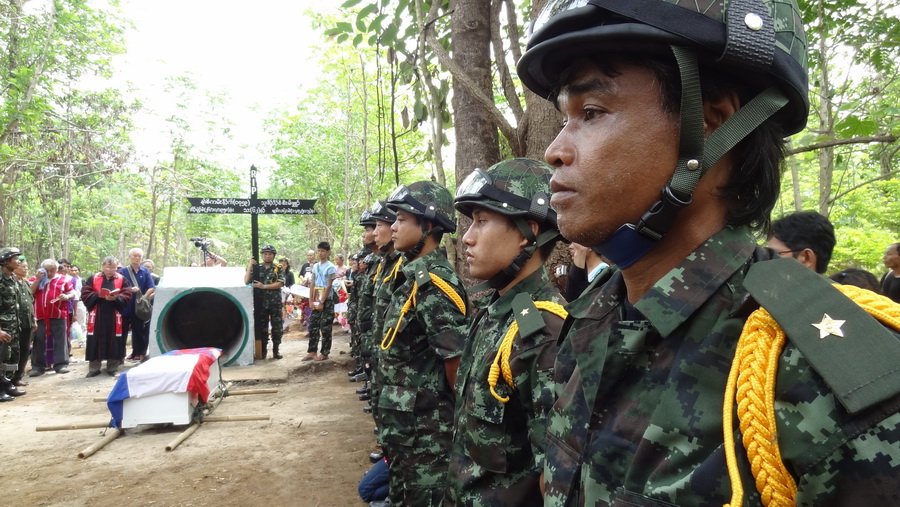 Colonel Moe Phyu’s funeral was held on May 14th at an undisclosed location in a KNU controlled area of 7th Brigade, Pa-an District in Karen State. More than 200 people attended his funeral service including his colleagues from the KNU, KNLA and individuals from Karen community-based-organizations.

“Losing a leader like Colonel Moe Phyu, who was also working on the peace building process, is a great loss to us. We feel sad.”

Colonel Moe Phyu joined the KNLA on March 1, 1975 at 1st Brigade in DooTha Htoo District as a private soldier. After that he was promoted to Second Lieutenant in August 1981, to Lieutenant in February 1984, to Captain in July 1990, to Major in March 1997, to Lieutenant Colonel in July 2001 and to Colonel in November 2006 also as G-2 until he passed away. His wife, Naw Klee Moo, and his four sons and three daughters survive Colonel Moe Phyu.