Burmese and Thai researchers speaking at a conference last week in Bangkok fear that the Dawei Special Industrial Zone planned for southern Burma will have severe negative impacts on thousands of local people as well as the environmental.

The 4th International Conference on Human Rights and Human Development held on the 19th of August at Chulalongkorn University featured papers on the Dawei Development Project.

A researcher Zaw Aung, who talked at the conference on Burma’s $60 billion Dawei Development said.

“In September, six villages out of 19 villages will start to be relocated for the Dawei Deep-Sea Port construction to new areas.”

Zaw Aung said that there are 19 villages that are estimated to have about 30,000 villagers along the coast of Dawei [Tavoy]. The reseracher said these villagers are to be evicted for the Dawei Development Industrial Zone. The first six villages to be relocated are home to over 10,000 people.

“There is no alternative housing yet. I have no idea how the affected people will cope with their new relocated area. This is involuntary relocation.”

Zaw Aung is concerned the government and the developers will use forced labor on the massive project.

“To build the relocation site, the government may use the labor of the effected people without wages, or with unfair wages. That is forced labor.”

The Italian-Thai Development Public Company Ltd. (ITD) was awarded a 60-year contract by Burma’s previous military regime for the mega Tavoy/Dawei Development Project. It is planned to build a deep-sea port, a 250-square-kilometer light and heavy industrial zone, a 4,000-megawatt coal-fired power plant, a superhighway and railways links to the Thai border in Kanchanaburi. The super highway system will also have transmission lines, oil and gas pipelines built along side it. 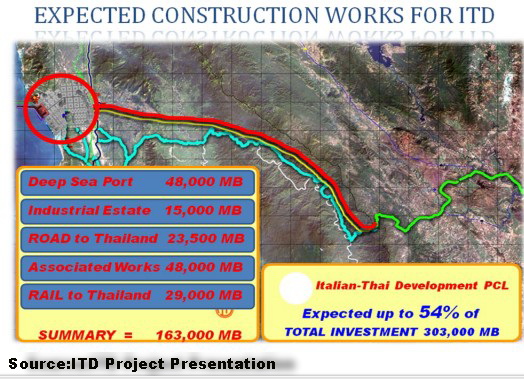 It has been estimated in the business media that infrastructure development will cost approximately US$8 billion and costs for the industrial area could reach as much as US$58 billion.

According to media reports the Italian-Thai Development Company paid US37.5 million to the Burmese government to lease 250 square kilometers of land.

Zaw Aung says the Burma government sold the land for little return.
“With simple mathematics, I calculate one Rai cost about 10 Baht. That is extremely cheap.”

The Dawei Special Economic Zone Law, states in article 24, that the Italian-Thai company is responsible for the cost of relocating villagers.

Zaw Aung said the construction has begun even before compensation to villagers has been discussed.

“They have even started cutting down the trees for the road construction, but [they] haven’t decided how much compensation is for one tree. The properties of the local community have already been confiscated.”

Local eye-witnesses said that apart from the immediate impact on 19 indigenous Tavoyan villages in Na Bu Lel area, another 12 Karen villages in Ka Moe Thway area, east of Tavoy, have also been affected by the road construction.

The road construction goes through at least five villages and has already destroyed some of the villagers’ plantations.

Zaw Aung says many contentious areas of concern will arise from the destruction.

Villagers may have a tough time getting a fair hearing to their compensation grievances.

According to the Land Nationalization Law stated in Article 39 of the Myanmar constitution, the president is given the power to “nationalize” any person’s land if it is for the benefit of the state. This article was further explained in the Pyithu Hluttaw session on the 9th of March 2011 by the Minister for Agriculture and Irrigation, U Htay Oo, that this event may take place if the minimum amount of land is seized and proper compensation is provided for those effected. This article was created to protect the rights of the agriculturalist.

In and Out Migration

Researcher Zaw Aung said the project will completely change environment for villagers and local businesses.
“Dawei is a completely agro business society, now they will inject billions of dollars into Dawei, and transform the whole landscape into industrialization.”

On the other hand investors are saying that because of the Dawei project, there will be many employment opportunities for Burmese workers.

Zaw Aung said some business people are saying that because of job creation, there will be less cross border migration of Burmese workers into Thailand.

“When looking at this type of job, it is quite different from the skills of local people. The people who face the landlessness issue and who have no job will migrate to Thailand. Foreign, skilled, industrial workers will go into Dawei and occupy the new jobs, while the local people will have little opportunity or the training to take advantage. Maybe they can get the low skill jobs like laboring work during the constructing period.”

Zaw Aung said the 4,000-megawatt coal power plant will be the biggest in South East Asia and ITD will expand it to 10,000 megawatts.

“It will create huge environmental and public health problems.”

To give an example of the effects can have, Zaw Aung cited a similar plant in northern Thailand, as to the type of problems people could expect from a large coal power plant. He said it is well documented that the Mae Moh coal fire power plant in Lampang has created many health and pollution problems for 25 local communities.

“The Lampang coal power plant only generated 2,600 megawatts, now here in Dawei, there will be 10,000 megawatts. You can imagine how serious the effects will be for the environment and on people’s health.”

Dr. Decharut Sukkumnoed from Faculty of Economics at Kasetsart University and Manager of the Healthy Public Policy Foundation said.

“The Dawei Special Economic Zone is part of the relocation of dirty industries from Thailand to our neighbors.”

Dr. Decharut Sukkumnoed said it is important to share the lessons learnt from the Map Ta Phut Industrial Estate in Rayong, as that is one of the main reasons industries are moving to Dawei. It is because of the public protests – the fight of the local people.

“I cannot imagine something bigger than Map Ta Phut. It will be a very big problem.
You can see with Dawei, that you have very big mountains just around economic zones. The area will become ‘a bowl of pollution’ – the pollution will not be able to escape from these zones.”

Dr. Decharut Sukkumnoed added that the Italian Thai Company’s plan in Dawei ‘is an investor’s dream’. He says the plan is without the study of environmental impacts.

“They don’t’ provide any information on environmental protection and they do not provide the social aspect of the development for the local communities.”

“In Map Ta Phut, we already faced 20-years of suffering before the people started fighting back by bringing the case to the court.”

“What we do in our neighbors [land] must be better than what happened in Thailand. The responsibility must be shared if we would like to be in the same ASEAN community. It is important for the Thai society to take responsibility for what will happen in Burma.”