Sources from the Karen alliance said. “The battle during [Thingyan water festival], red arm ties and special commandos of Burma Army’s Infantry Battalion 118 under the command of the 44th Division fired four rounds of the MA14 Carl-Gustav recoilless artillery at us. International sale of these munitions to Burma is banned.”

KNLA sources said these “weapons can be loaded with different kinds of bombs to demolish bunkers and destroy tanks, and they also can explode on the ground. The shells we seized were ones that exploded in the air.”

The source from KNLA joint forces said that they not only want the the international community to know about the atrocities of the Burma Army but they are using heavy artillery, helicopters, fighter jets, 500 pounds bombs, and even banned weapons during the battle of Lay Kay Kaw.

Recent fighting between the Burma Army and KNLA joint forces has intensified in the Lay Kay Kaw area as well as in Maw Kee village, the Waw Lay area south of Myawaddy Township of Karen State. 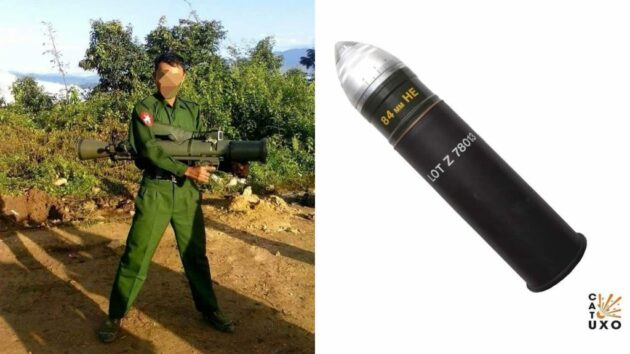 The recent use of Carl Gustav artillery against Ethnic Armed Organizations by the Burma Army is not the first time. In 2012 the Burma Army used them in attacks against the Kachin Independent Army in Northern Burma – it is alleged the Swedish weapons were originally sold to India.

“[PM] Modi supplies arms to the Burmese military knowing that they are likely to be used against civilians,” said Anna Roberts, Executive Director of Burma Campaign UK. “Boris Johnson must call on Modi to stop arming the Burmese military, and to stop deporting Rohingya refugees.”

The Burma Campaign UK said in its statement that “several Indian companies are on the ‘Dirty List’ published by Burma Campaign UK, including Tata Group, which has supplied vehicles to the Burmese military. In the UK Tata is best known for its Tetley brand of tea.”