During the last week of September, money exchanges offered 2,700 Kyat to the US dollar compared to 1,695 on the 1st September.

The local currency began falling immediately after the military launched its coup against the democratically elected government on 1st February. When the military-appointed State Administration Council took control of the country, the Kyat traded at 1,395 to the US dollar, by the end of September a US dollar cost 2,700kyat.

Money brokers based in Hpa-an and on the Thai Burma border told Karen News they have shut up shop because of the devalue of the Kyat.

“We just can’t afford to sell kyat for dollars at this price, I have no other option, but to stop trading.”

The World Bank’s forecast last week that Burma’s economy would crash by 18% in 2021 and its prediction the country would witness the regions worst reduction in employment would combine to increase poverty.

The dire economic situation, spread of COVID-19, military airstrikes against ethnic villagers, arrest and hunting of civilian protestors, doctors, workers, journalists and politicians by the military junta has thrashed and disabled the country’s infrastructure – farming, banking, transport and healthcare.

A Hpa-an resident, who runs a food store, explained to Karen News how the military-appointed State Administration Council’s mishandling of the economic situation is affecting daily life.

“People are facing jobs shortages and less income. Their spending has reduced because although their wages remained the same, commodity prices have risen.

In the past, when commodity prices went up, we could still balance it with our sales. Now, this is no longer the case. No matter how much we sell, there is not much profit left. It leaves us with only enough for our daily basic needs, there’s no extra money to save.”

A stall owner in the Thai-Burma border town of Myawaddy told Karen News this is the worst drop in value of Kyat she has ever experienced. Stalls owners are now unable to afford to buy Thai products due to the Kyat’s fall. 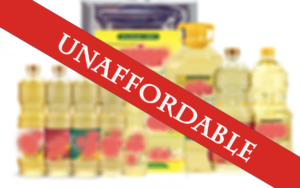 “Since the dramatic drop in the value of the Kyat, the price of goods from Thailand is high. Few of our customers can now afford these items – detergents, shampoos, instant noodles, cooking oil, tinned fish and everyday cooking products. The exchange rate between Kyat and Baht is not stable and this makes it hard to set the prices of imported goods.”

The stall holder said the price of basic imported food had almost doubled in the last few months and told Karen News, “a litre of cooking oil was 1,500kyat weeks ago is 2,600kyat. A packet of bulk instant noodles we sold at 6,000kyat has now risen to 10,000kyat.”

The failing economic system has left people with hard choices to make. Local fruit sellers explained to Karen News people are not buying fresh fruit as they are proitizing their spending on what is regarded as vital food items – rice, fish sauces, eggs, canned fish, cooking oil, salt and meat. 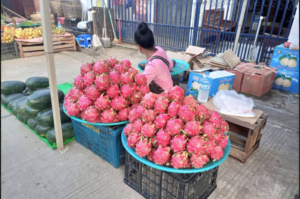 “We can’t raise the price of our fruit. It’s not regarded as vital like rice or cooking oil. Our prices are the same, but we see very few customers now. Maybe people are now spending their money on what they think are necessary basic food items.”

“I’m still managing to earn the same amount of money for now, but I make very little. In the past, I usually earned 30,000kyat a day and that would leave me with a profit of nearly 12,000 Kyat a day. But now, there’s very little profit left for me as I need to spend more on the cost of betel nut, betel leaf and other items.”