Reports circulated the Burma Army were putting in place plans to use counter-insurgency strategies against opposition against the military coup – the National Unity Government (NUG) and the People’s Defense Forces (PDF) – taking refuge in KNU controlled territory.

Fighting in Karen National Liberation Army 5th and 1st Brigades has now spread to KNLA Brigade 6 and Brigade 7. Local villagers told Karen News, convoys of army truck with hundreds of soldiers were sent in as reinforcements to KNU controlled areas.

A Kawkareik resident living in the KNU 6th Brigade told Karen News what he saw and heard.

“The situation in Kawkareik is not good. There are around 100 soldiers stationed on the Kamaing hill side of the river and we can see groups on the other side, but its hard to estimate how many. Shooting has started, they [soldiers] fired indiscrimately and frequently, but we couldn’t count the number of shots. Local people are scared and are starting to run to safer places.”

A senior Karen National Liberation Army officer told Karen News, the military coup leaders are worried about recent successful attacks carried out by the People’s Defense Forces on army and police targets. In an attempt to combat the increasing number of attacks by the People’s Defense Forces, the State Administration Council has held meetings with its sponsored militia, the Border Guard Force (BGF), to draw up plans to defeat the growing threat posed by the PDFs taking refuge in the KNU’s 6th and 7th Brigade.

“Their [Burma Army] operations are increasing, there are reports that they are going to try to wipeout the PDFs in 6th and 7th Brigades.” 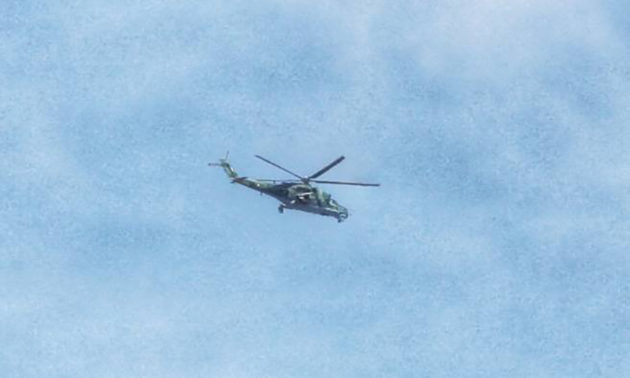 The Burma Army’s battle plan in recent years is to wait until the wet season stops and as the dry season nears attack KNLA positions. Karen soldiers said in recent weeks the military has sent helicopters over KNU positions and the increase on the ground of its soldiers and BGF troops is an indication fighting is planned.

Border Guard Force soldiers under orders from the Military SAC have also increased its operations in KNU areas. A KNLA commander said that if incursions into KNU territory continue in the hunt for PDF members, it would only be a matter of time before a serious confrontation happened.

“These people (NUG and PDF members) are now seeking refuge in our territory because they can no longer live under military rule – they need our humanitarian help. We have responsibility for their safety. They [Burma Army] will continue to work to their plans. However, it has been decided by our headquarters, if they [Burma Army] cross our lines, we will have to front the military for our own security,” the KNLA officer said.

Since the military coup, daily armed clashes took place in the KNU 5th, 2nd and 3rd Brigade areas – and fighting started and continue from early this week in 6th Brigade.