For the first time, on February 11, 2013 over 2,300 displaced Karen villagers taking refuge in Ei Tu Hta internally displaced camp on the banks of the Salween River celebrated Karen National Day.

“This is the first time for me – I never saw the celebration of our Karen National Day. The celebration reminded me of the historic nationwide peaceful demonstration by the Karen people in 1948.”

In 1948 tens-of-thousands Karen people took to the streets in a nation-wide peaceful demonstration in Burma to demand their equal rights. Today Karen people commemorate that historical protest as Karen National Day, but because of the civil war it is rarely been openly celebrated. 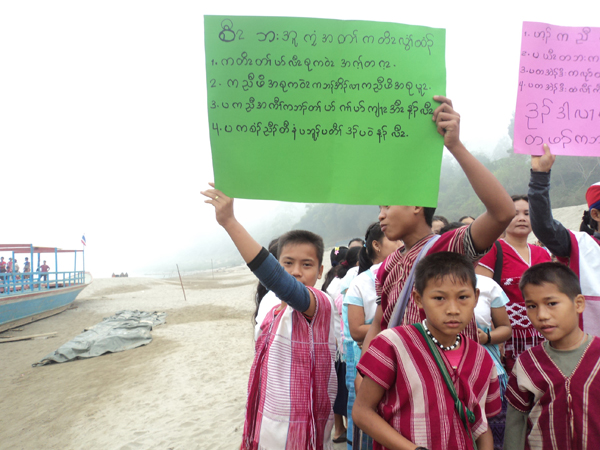 After Burma got its independence in 1948 from the British, thousands of Karen demonstrated using slogan that demanded, ‘We want a Karen State now’, ‘Karen one Kyat, Burmese one Kyat’, ‘We don’t want civil war’, and ‘We don’t want communal (ethnic) clashes’.

The slogans also demonstrated that the Karen were demanding their political freedom and self-determination, equal rights, peace and ethnic mutual-respect.
The Karen National Union President, General Mutu Say Poe, said in a statement to commemorate the 65th Anniversary of Karen National Day said.

General Mutu said that the Karen people were driven to armed resistance after their peaceful demands were ignored until the recent ceasefire arrangement currently in place.

General Mutu stressed that the Karen resistance is not yet over and urged the people to continue to struggle for the rights.

“We the Karens are not a people who have the spirit to surrender under persecution. I would like to demand earnestly from you, the Karen people, from now on to safeguard our true Karen identities and honor, stand and live as a people who desire self-determination.”