Local villagers affected by the development of the controversial Dawei (Tavoy) Special Economic Zone in Southern Burma say they are disappointed with the team from Chulalongkorn University Environmental Research Institute hired by the Italian-Thai Development Company to carry out an Environmental Impact Assessment (EIA) on the project.

Villagers from Kaw Tee Lor (Thebyut Chaung) and the the University’s EIA team met to discuss aspects of the route the construction of the Tavoy-Kanchanaburi highway would take. The villagers said the Thai surveyors would or could not answer their questions about the project and only emphasized project benefits.

Saw Aye, a villager, who attended the meeting told Karen News “They [EIA team] showed us a map of the car road. They said this road is for your village’s development. They have already finished building a ‘dust’ road [unsealed]. In 2012 to 2015 they will finish building four-lane highway. In 2017 they said will extend it up to eight lanes.” 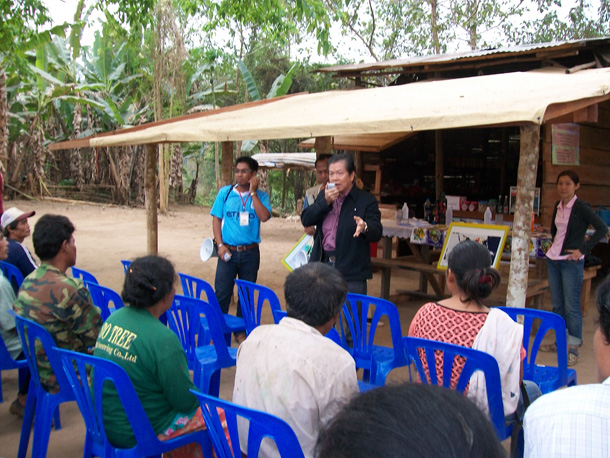 Video footage seen by Karen News of the EIA meeting filmed by a villager shows a surveyor with a map of the project who tells the villagers the Tavoy project will be a link to India. The team members seen in the video appear nervous a team leader is controlling the team members.

Saw Aye said the asked the villagers a series of questions and offered only a basic rationale of how it would affect the villagers.

“They asked us did we know the road will pass through our village? Do you know the road is for transportation and for an electricity line? It will make transportation better for you? We already knew this. But when we asked exactly how wide the road would be and how far it will extend, they said they didn’t know. The villagers asked how the company plans to take care of the local peoples’ land and plantations? When we asked about the plantations, houses and farms destroyed by the company, they replied that they cannot answer these questions.”

Saw Aye said villagers also asked the Chulalongkorn University EIA team how the development would impact on local rivers and land they were met with silence.

“We asked them what environmental impacts the project will have on our village, for example, if the company clears trees how will the river we use be affected. We asked what other planned projects for the area are linked to the Dawei project? They didn’t give us any answers.”

Saw Aye said the meeting with the Chulalongkorn University Environmental Research Institute team was a huge disappointment to the villagers.

“Some villagers are disappointed and others left the meeting before it had finished, other villagers did not fill out the forms given to them by the EIA surveyors.”

The ITD Company is a Thai owned company that is developing the $60 billion mega Tavoy/Dawei Development Project in Tavoy, Southern Burma. The project includes a deep-sea port, a 250-square-kilometer light and heavy industrial zone, a 4,000-megawatt coal-fired power plant, and railways link to the Thai border in Kanchanaburi. The super highway system will also have transmission lines and oil and gas pipelines constructed alongside it.

Since December 2011, the Karen National Union had blocked the ITD road construction due to villagers concerns of how the project would affect their farms and the environment. The KNU lifted its blockage on the road construction after the ITD agreed to carry out environmental impact assessment. The KNU says the agreement is only for an access road for to allow the EIA and Social Impact Assessment to survey the route for highway.

The Dawei Special Economy Zone planned construction has run into a number of problems that have delayed it. These include the KNU’s ban on the road construction, armed conflict in the project area, the Burma government’s cancellation of a 4,000-megawatt coal-fired power plant and the opposition from thousands of local people who will be evicted from their homes.