The Karen Women’s Organisation (KWO), estimates at least 46 civilians have been killed and 139 injured by artillery shelling and landmines in Karen State since the coup, while more 200,000 people have been displaced.

“I was so upset that I did not want to talk about it again. Our father was devastated by this tragedy because of his love for his daughter. My father said he wanted to die instead of his Naw Bleh Cho Cho. We are deeply saddened that she died at such a young age. For example, if she dies of a disease. Now it was her destiny that she had been killed by an artillery shell.”

Naw Eh P’saw Paw said the Burma Army shelling followed fighting between Burma Army and soliders from the Karen National Liberation Army (KNLA), the KNU’s armed wing. Two other villagers were injured in the shelling and taken to Hpa-An hospital for treatment.

The KNU’s Department of Organization and Information, said during March, 25 villagers in Htee Mu Hta were killed and 33 wounded. The dead included at least three children aged between two and 14 years old, as well as an expectant mother. More women were killed and injured than men, the KNU noted.

Naw K’nyaw Paw, secretary of the KWO, explained to Karen News about why she thinks more women and children were likely to be casualties from artillery bombardments.

“Women are often at home. Women and children have to hide in groups, making women and children to be hit by heavy shelling. Women cannot run as fast when there is a clash. It is difficult for pregnant women when they have to flee.

Villagers pointed out that in addition to firing artillery shells into villages, Burma Army soldiers looted properties, livestock and money, and destroyed homes, rice stores and buildings in the villages where they are stationed.

A Burma Army battalion commander, captured as a prisoner-of-war (POW) by the KNU spoke to Karen News on the condition that his name not be used and his voice distorted, accusing Karen soldiers of disguising themselves as villagers.

“We didn’t shoot down in the village targeting villagers. It is the armed people in the village who are pretending to be the villagers because they are of the same ethnic. Therefore, if heavy artillery is fired at the village, they will not be able to come and ambush. The armed forces live in shelters. 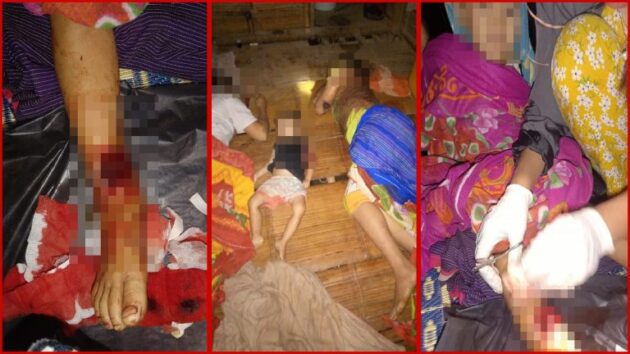 The Burma Army captain’s blamed villagers for going about their lives as normal when artillery shells were exploding.

“Villagers do not understand the military operation and they work normally…like going to their farms. Many villagers can be hit. The order is from the high rank level in our operation. There is no order to shoot to the exact place from above [command].”

An official from the Karen National Liberation Army rejected the Burma Army captain’s claims, pointing the KNU abides by the rules of war and does not use human shields., unlike the Burma Army, and said KNLA soldiers were located outside villages.

Conflict between the Karen and various Burma military governments dates back to after Burma’s independence in the 1940s, and has been ongoing for decades. In 2012 the KNU signed a bilateral ceasefire with the military backed USDP government. In 2015 it was the largest and most influential ethnic armed group to sign the government’s Nationwide Ceasefire Agreement (NCA).

Armed clashes continued in Karen State despite reforms and ceasefire between 2011 and 2020. Full scale fighting only returned to the state after last year’s military coup.

Naw K’nyaw Paw, secretary of the KWO, called on Burma Army soldiers to stop shooting into civilian areas, and not to endanger the lives and property of local people.

“If fighting breaks out, both sides must avoid firing into the villages. Some Karen armed groups have been sheltering local villagers in advance of the fighting. The Burma Army does not do that and attacked villages and use locals [civilians] as human shields. When the Burma Army trucks have been attacked, their soldiers opened fire on villages. The Burma Army has the same attitude towards ethnic armed groups and the people. These are voilation of the rules of war.”

As of June 16, 2022, the Assistance Association for Political Prisoners estimates since the coup the Burma military has killed 1,958 people and arrested at least another 14,139.

Naw Eh P’saw Paw said the Burma Army attacks on villagers has to stop.
“No one wants armed conflict. The Burma military has not stopped attacks on the civilians yet. The locals are still fleeing their homes due to the frequent fighting near our village. We don’t want the fighting because there are people affected by the armed conflicts. Family members could not stay together due to the clashes.” 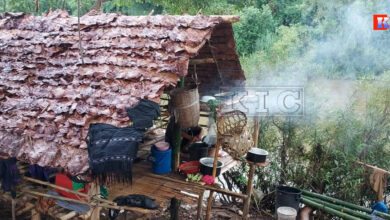 Civil Society Alliance: ‘UN Funds at Risk of Being Used as Weapon Against People of Myanmar…’