The employees, members of the Civil Disobedience Movement (CDM) have instead continued to show their opposition to the coup and instead cooperated with the interim education program run by the National Unity Government (NUG).

Despite the State Military Council’s deadline of May 31st for education staff absent from duties to return to their positions at the Department of Education, most CDM members are reluctant to return.

A CDM education worker, who spoke on the condition of anonymity, said, “Before the coup, there were around 1,000 education staff. Even when the village schools were previously recruiting teachers, there were never enough teachers to teach. Whether they do the elections or open schools, there is no way they can operate. They only open schools in the cities for show. CDM education staff are now working with the NUG’s interim education programs.”

A CDM member said most [CDM] education employees do not trust the military council’s invitation to return to work and said some staff only went back after threats were made to their family.

The CDM member said, “We don’t want to return to the department. They have no power to reopen the school. They are trying to convince us or threaten us. No one believes them, they (the military council) are arresting people because of d reports made by Ma Ba Tha and pro-military supporters. Teachers who returned to their positions did so because of threats to their families.” 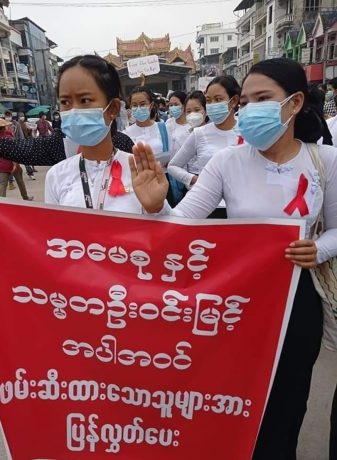 More than a year after the military coup, the NUG government started interim education programs in liberated areas under the control of Ethnic Armed Organization and by the People’s Defense Forces. The NUG is also working with students and CDM education staff in the liberated areas to reopen local schools under the Karen Education and Culture Department of Karen National Union.

Many education staff involved in the CDM movement were given termination letters, warning letters for non-repayment of loans and arrest warrants for alleged breaches of various law by the State Administration Council ‘s Education Department. Around 300 people returned to the department after signing confessions after threats were made to their families.