In the wild grassland on the banks of the Moei River, that separates Thailand from Burma, clusters of small makeshift huts with plastic sheet roofing huddle under the shade of bamboo groves or tall bushes. Pick-up trucks, tractor-trucks and motorbikes are covered in dust and now parked idle in the harvested corn fields near the temporary shelters.

Inside the small one-roomed tarpaulin shelter village elders, children, mothers with young infants, sit waiting and concerned for the fighting to stop. They estimate there are more than 80 children, including infants sheltering in the huts. 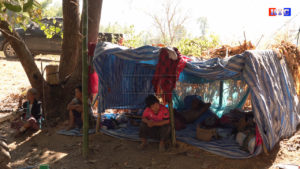 Among them are Daw Tin Tin, 60, who is quick to share her story and how she is coping with it after running from the fighting.

“Everything is difficult. We are fortunate that we are given [donated] meal boxes. We don’t have pots, cups and blankets – you can see how our living situation is right now. We’ve just made a wall with tarpaulin, there is no floor, a poor living condition and there’s no security. Even if we have rice, we can’t cook without pots. We have to wait for other people to give us food and if others do not give, we will starve.”

Daw Tin Tin fled her home at the beginning of the fighting in mid-December 2021 and she has had to run to at least four different hiding places.

“On the first night, I stayed in the bamboo forest behind my house. Later we couldn’t stay there anymore so we ran to the monastery. In the monastery, the monks also had to run, so we went together with others by car to Palu Gyi. We stayed there for only two or three days and the fighting happened again so we had to run again. From there we ran to Kyauk Ket and then from there to here.”

Like Daw Tin Tin and her family, residents of Lay Kay Kaw New Town, and other villages including Htee Mae Wah Khee, Mae Htaw Talay, P’He Klaw, Yathit Gu, Palu Lay, joined thousands of villagers to remain on the Moei River bank on the Burma side.

Most of the displaced people sheltering on the banks of the Moei River now depend on donated meal boxes provided by donors and communities as they fled leaving their pots and plates behind.

Zaw Lin Maung and his family were among those who stayed on the banks of the Moei River, having to move from hiding place to hiding place trying to stay on the Burma side of the border rather than crossing to the Thai side.

Zaw Lin Maung told Karen News he had to abandon his plantations and run for his life.

“We had to leave our beans and corn, we haven’t been able to mill it yet.”

As a corn farmer who took loans from an investor, Zaw Lin Maung is worried he will not be able to pay back the money he borrowed.

“I didn’t do it [farming] with my own money. I borrowed money from investors who gave loans of 50,000 and up to 100,000 Thai Baht per farmer. I am hopeful I will be able to mill my beans and corns without having to flee to another country.”

Zaw Lin Maung said because of the fighting, the impacts on local villagers are devastating – and he said innocent children are suffering from trauma.

“Our villagers do not understand anything related to any matters (of politics). There are a lot of children and villagers who are fleeing and now displaced – it hurts when we talk about it. It’s not just my children, many children are suffering from fear and [see] their future as bleak.”

While as many as 7,000 displaced villagers are displaced within Burma’s side of the border, more than 3,000 took refuge in Thailand, another 2,000 are taking refuge on the edge of the Moei River. Without access to clean water and safe shelter, some displaced children are suffering from diarrhoea and vomiting caused by drinking dirty water.

Displaced people living in the temporary shelters on the banks of the Moei river are being cared for by Karen civil society organisations, relief organisations on the Thai side and migrant workers groups who are providing food, shelter and healthcare. Local Karen armed groups are taking responsibility for security of the displaced villagers.

Colonel Saw San Aung, a tactical commander for the Democratic Karen Army (DKBA) Headquarters, who is working to resettle and provide security for displaced people near Palu Lay village area said, they are doing what they can but stressed there is no guaranteed security for the displaced villagers.

“At the beginning of the fighting, we provided food for them and for others transportation. But we could not provide enough services for them and there are still concerns for their future. Some people go back and then come back again. I do not think the situation is conducive or safe to do this.”

Colonel Saw San Aung suggested a permanent demilitarised zone should be set up with the help of an international intervention program and relevant organisations to protect the displaced civilians.

“The authorities, armed groups and the military council will need to designate an official demilitarised zone. If we can manage like that, we will have security for the people. We can say now that there is no security.”

Colonel Saw San Aung’s worries for the safety of the displaced villagers was evident when a woman villager who returned to her home in Palu village was hit by a Burma Army artillery shell that also wounded three others on 3rd January 2022.

Local Karen armed groups have joined with community leaders to provide assistance to displaced people by forming a committee to oversee and coordinate the delivery of aid to displaced communities.

“We have identified four areas that displaced villagers from the eastern part of Dawna Range can temporarily shelter. Arrangements are being put in place for community-based agencies to coordinate food, health and other aid. There are plans being made, including the issue of the security for IDPs.”

Although fighting has eased in recent days, the Burma Army is still occupying the Lay Kay Kaw area and continuing its operations. Local security sources said fighting is likely to continue. Aid workers said displaced villagers are still unable to return to their homes.

During the fighting, artillery shelling and airstrikes by the Burma Army destroyed housing and residents allege Burma Army soldiers broke into houses and stole villagers’ belongings, livestock, cars and motorbikes. 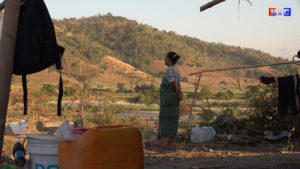 Many displaced villagers, including Daw Tin Tin, want the fighting to end so that they can return to their homes.

“These are problems between people and authorities. We have nothing to do with it. For us, we always need to think about where we will flee if the fighting breaks out? We just have to figure out where to hide. I do not want this to happen again. I want this to stop. Everyone wants peace.”

It is uncertain what Daw Tin Tin wants will be fulfilled anytime soon as there are no signs of an end to the fighting in the Lay Kay Kaw area. The villagers say they are running for their lives, having to survive in bamboo groves where they will have to spend many more nights in their makeshift shelters.