The fighting followed a Burma Army raid on Lay Kay Kaw village that is under the control of the Karen National Union. The Burma Army 560 Light Infantry Brigade led the raid and kidnapped a number of people, including an elected National League for Democracy, Member of Parliament.

On Monday three Burma Army columns entered the areas from different directions searching for anti-coup protesters, democracy activists, members of the Civil Disobedience Movement (CDM) and peopled linked to People Defence Force (PDF) movement. The Burma Army targeted Lay Kay Kaw New Town believing people had fled there seeking safety from the regime as it is under the control of the Karen National Union.

Fighting broke out following the Burma Army’s raid and house-to-house searches and the arrest of 32 people, including a former Member of Parliament of the National League for Democracy, anti-coup protestors and CDM members.

A Karen News reporter reporting from the conflict zone described the situation.

“Just where I am now, there are over 50 people caught in the middle of the fight. There’s been lots of gunfire and we dare not go anywhere, it’s too dangerous.”

The reporter said the Burma Army Light Infantry Battalion 560 have now taken up positions on hilltops and in resident’s homes and are firing artillery and mortars towards the bases of the mountain range behind Lay Kay Kaw New Town, targeting KNLA or PDF positions. 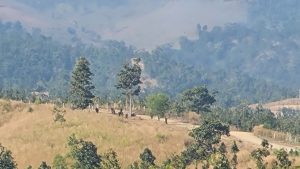 Villagers in the area, including Lay Kay Kaw New Town residents scared about being caught in the crossfire have fled their homes and are now seeking safety close to the Thai Burma border.

Karen News is led to understand Lay Kay Kaw New Town became a target for the Burma Army following the arrest of people involved in the anti-coup movement and after a CMD police officer surrendered back to the military.

According to Karen News reporter in the area, there are still many residents unable to leave their home being caught between the firefight.

A Yangon journalist, evading an arrest warrant, who fled to the safety of Lay Kay Kaw told Karen News, reporting by some Burmese media was naïve, divisive and disappointing.

“To try to blame and insinuate that somehow the KNU agreed that the Burma Army could enter and detain people doesn’t make sense. I was there for six weeks and all the time Burma Army were building, resupplying and reinforcing its troops in the area. I suspect people arrested and during their interrogation talked. The military have proven expert over the years at driving wedges between its opposition – ethnic or Bamar – and unfortunately, it always seems to work to their advantage.”

Burma Army soldiers had enter and conduct searches seven times at at Lay Kay Kaw New town and in nearby villages, looking for People’s Defense Force (PDF) volunteers under the control of the anti-coup National Unity Government. During the previous searches there were no arrests. 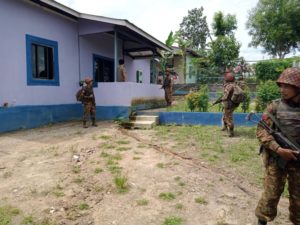 Padoh Saw Kwe Htoo Win, told Karen News that they had tried to keep everyone in the area safe.

“Our organization has taken responsibility to provide protection for those people who are caught in a difficult and unsafe situation at the moment, but at the same time people need to take responsibility for their own protection and safety. If not, it makes it difficult for them and for us.”

Padoh Saw Kwe Htoo Win said the Burma Army’s actions were to blame for the fighting.

“We don’t want conflict in the area, however, if this is too much [Burma Army aggression] we won’t allow it to happen. That’s why the fighting took place today, we don’t know what will happen next, but it could spread to other areas and can have unnecessary impacts. If our organziation’s will for peace-building is not respected, there will be definitely a different end result.”

It was reported the Burma Army raid was led by the Commander of the Military Operation Command MOC 13, that led to the fighting.