Despite the peaceful ceremonies police in Rangoon arrested Karen organizers of the 2020 Martyrs’ Day commemoration held in Maha Bandula Park in central of the town where many Karen people in the region joined to pay tribute to the Martyrs pillar.

During the event, police turned up and arrested two of the five youth organizers, Sa Thein Zaw Min and Saw Hsa Kwa Lar and charged them under Article 20 – the peaceful assembly and peaceful procession law.

Youth organizers denied they had broken the law and argued local authorities were notified in advance about the event two days ahead, including following Covid-19 protocols.

A youth organizer said police officials turned up around 11am and told organizers that their time was up.

Nant May Thinzar, one of the organizers for the event said.

“When we got to the police station, they only let two of us to go into the building and said that the two were charged under article 20.”

It was not the first time Karen people were arrested for taking time to honour their Martyrs, in 2019 three organizers- two Karen youths and a Karen woman activist Naw Ohn Hla were arrested and sentenced to 15-days jail for organizing last year’s Karen Martyrs’ Day at Rangoon’s Maha Bandula Park.

Despite eight years of being in peace talks with the government, the Karen National Liberation Army chief said in a speech made during the 70th Karen Martyrs’ Day that the Karen have to “hope for the best, but have to prepare for the worst.” 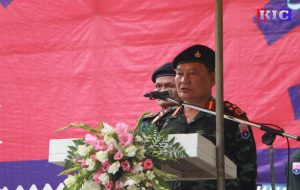 “We haven’t gained any important political solution for our Karen people. Today, don’t we still even have a nationwide ceasefire that includes all ethnic groups, even this is not possible. The national election is coming up and maybe a new government will be in power. We don’t know what changes it will bring, but we have to be prepared.”

While the peace process between the Burma government and ethnic armed organizations has achieved nothing tangible and moves at a snail pace, armed conflict and increased tensions over territory is now common in the ethnic regions.

Recent killings of civilians by Burma Army soldiers, angered and increased security concerns for villagers and resulted in protests demanding Burma Army withdraw its troops and close its camps in ethnic areas.

Martyr’s Day is held each year to remember and honour the Karen’s charismatic leader, Saw Ba U Gyi who was murdered by the Burma Army on August 12, 1950 and all those soldiers and Karen people who died in the struggle for self-determination.