“I made my decision based on what I can do, what I want to do and what position I could fix in. If the party gives me the responsibility of another position I will carry on with that duty.”

There are reports of a Karen woman, who is a member of Amyotha Hlutaw (House of Nationalities) from NLD is planning to run for the post of Karen Ethnic Affair Minister for the Yangon Region.

Naw Ohn Hla, a popular activist known for her advocacy for land rights, democracy rights and ethnic rights has announced she will run for the Yangon Region’s Karen Ethnic Affair Minister as a candidate for the United Nationalities Democracy Party (UNDP). 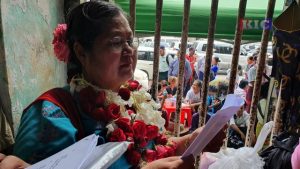 Naw Ohn Hla known for her courageous stands against the injustices in the country, not only among Karen communities, but also among other ethnic nationalities in Burma. She has been jailed and fought a number of lawsuits, under both the military backed USDP and NLD governments, for her leading role in organizing protests against controversial land issues, developments and ethnic rights.