Today, while the peace dialogue in Nay Phyi Daw resumes for its second round, displaced Karen villagers in remote areas of northern Karen State staged a protest over the Burma Army occupying their lands and preventing their safe return.

The protest took place at Ei Tu Hta, an internally displaced people camp situated on the Salween River in Papun district. Camp residents and local villagers came together to call for the withdrawal of government troops from their areas so that the displaced villagers could return to their lands.

Naw Hsa Gay, an IDP from Ei Tu Hta and quoted in a media statement issued by the protesters said that she wants to go back to live in her village.

“The Burma Army troops are still located in my village,” Naw Hsa Gay said, “I fled from home because of their abuses and I dare not go back. I want the Burma Army troops to move out completely from our area and to burn their bases. Only then, will we dare to return.” 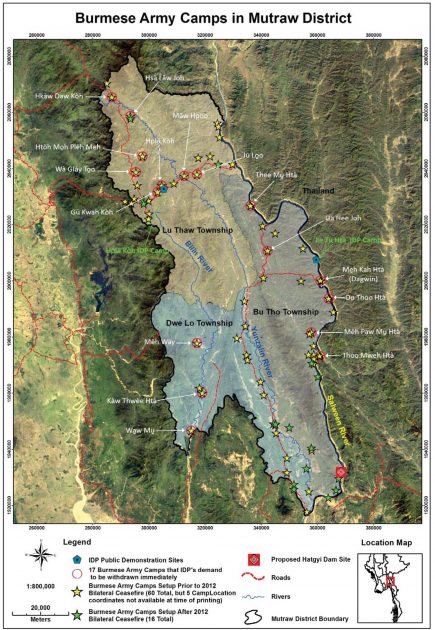 The media statement pointed out that the peace process had been going on for almost six years with little to show for it in the way of concrete results. But, ironically villagers said that all the peace dialogues, talk of reforms had now put added pressure on refugees and IDPs to return to their homes in Burma. Villagers told Karen News the increased pressure came without any guarantees by either the Burmese government or the international community that there is a plan in place that guarantees their safety, offers work or education for their children. During the last six years, INGOs have been withdrawing health and education programs, as well as severely reducing food and shelter supplies for the displaced populations. Refugees and displaced people told Karen News that they are been starved out of the camps and this is despite “fear of landmines and no security is forcing us to move.”

Community groups supporting the 4,000 people displaced people living at Ei Tu Ta Camp, have said that all support will stop in September this year.

In an interview with Karen News, Saw Nay Tha Blay, the deputy director of the Karen Office of Relief and Development (KORD), a community based group that coordinates support for the camp confirmed that donors will withdraw their support.

“Yes, it [the supports] will stop on September 2017. Actually, we have been told since 2014 that the assistance will stop in 2016, but later it moved to 2017. Our donors [said] that we should start making preparedness before the funding stops because the remaining funding then will help us in our preparation. I believe this happened because of political changes – the ceasefire agreement and the ongoing peace process that shifted the focus of international donors from border areas into Rangoon.”

Ei Tu Hta camp was set up in 2006 to look after displaced villagers who fled a major Burma Army offensive in Eastern Pegu division.

The Burma Army offensives against ethnic people in the last 20 years has displaced over 600,000 people in Eastern Burma. Despite talk of reforms and peace since 2012, five laters, in 2017, as many as 400,000 are still displaced by fighting or human rights abuses. Many of these villagers now live in jungle shelters or makeshift camps. Another 120,000 people live in refugee camps along the Thai Burma border.

The displaced people and refugees are under immense pressure from INGO’s, government authorities and the international community to return to their land. Donors have withdrawn support – rations, education and medical support has been cut or stopped. So far the Burmese government has done little to help the country’s displaced.
Displaced people want to go home, but point out that there’s a huge problem. Their land is still occupied by the Burma Army – the army that burnt them out of their homes.

Returning is not a safe option, as the Burma Army has planted thousands of landmines around their homes, farms and surrounding jungles pathways.

“I wish all the land mines to be demobilized and the military bases removed from civilian areas so that we can go back and stay peacefully. I really hope to see Daw Aung San Suu Kyi’s government bring about this change”.

The displaced villagers from Ei Tu Hta IDP camp protesting to get the Burma Army removed from their lands have demanded that:
– Military camps must withdraw completely from our villages, farms, orchards and the roads towards our homes.
– Land mines must be removed from our villages, farms, orchards and roads.
– An end to human rights violations, such as sexual abuse, forced labor, extortion, killing, and the destruction or confiscation of farms and orchards.
– The end of civil war in all ethnic areas of Burma
– A code of conduct that is properly monitored for government and ethnic military to uphold
– Refugee and IDP return should be a part of the peace agreement with a comprehensive and clear plan for the reintegration of IDPs and refugees, with IDP return as the first priority, which includes genuine consultation with the affected populations.