DKBA No. 2 tactical command center is under the leadership of Colonel Saw A Wan, whose house was toppled in the bombing. The village clinic hit by the bomb had been providing free healthcare to the people of Dooplaya district since the time of the Covid pandemic, villagers said.

Although it is well -known that the DKBA is a Karen armed organization that signed the Nationwide Ceasefire Agreement (NCA) led by Saw Steel, the Commander-in-Chief of the DKBA, who had become an ally of the Military Council even before the 2021 coup.

However this DKBA unit under Colonel Saw operates inside the KNU zone and cooperates with the Karen anti-coup forces led by the KNLA.

The family homes of this DKBA unit and some office buildings were destroyed by the bombs.In addition, the DKBA’s free public healthcare clinic and the village church were also damaged during the attack, a village official told KIC. 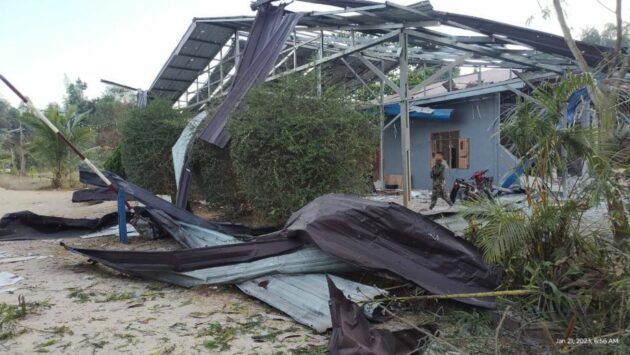 “Around 1:00 at night, the planes arrived and started dropping bombs. Bombs fell all over the command center of DKBA, as well as the operating room of the clinic and near the church in the village. Bombs also landed near the gate of the command center and the training ground. A total of 6 bombs were dropped. There were some minor injuries”, he said.

After the Military Council bombed the DKBA command center and around the Kyein Chaung village, residents living nearby had to flee for safety. KIC contacted DKBA about the attack but have not yet received a reply and the details of the damage are still unknown.