The cricket season is short, from April to May and villages from Kyate, Kwin Kalay, Paing Kalan Don, and Mi Ka Tho’ in Kyarinnseikgyi Township, hunt crickets to sell to buyers at Kawkareik town’s market to earn money to support their livelihood.

According to the insect hunters, the crickets are caught in their natural habitats in the fields around the villages using light bulbs powered from generators. The crickets are sold to buyers for between K6,000 to K7,000 a Pyi (equavilent to 2.5 L).

Naung Ma The’, a cricket hunter, told Karen News, “we get more crickets by using generators than catching it naturally. We catch them and we sell them. We get around 30 tins (40.9 L per tin) every night. We usually catch crickets from April to May.”

In recent months transportation in villages between Kawkareik and Kyaikdon has been restricted because of intense fighting between the Karen National Liberation Army (KNLA) and the Burma Army.

Despite the dangers of being caught in the fighting, villagers are prepared to take risks to catch crickets to help support their family’s livelihood. 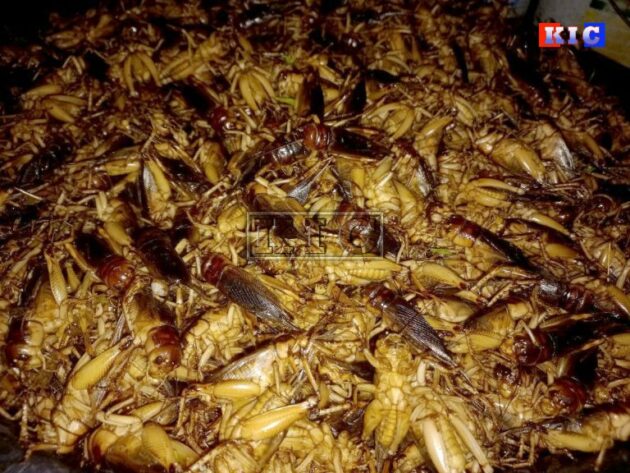 The constant daily fighting and forced displacement has prevented most residents in Kawkareik Township from living normal lives.

Peanut farmers in the area have faced a hard time, having to sell their crops at low prices as fighting prevented them having enough time to cultivate their land or harvest their crops. Domestic animals let loose destroyed crops as fighting also forced their owners out of their homes and into hiding.

Recent Burma Army aerial strikes and artillery ground attacks displaced more than 20,000 villagers in the southern part of Kawkariek Town alone. Community groups helping the displaced villagers estimate as many as 140,000 villages accross the KNU seven districts were forced from their homes in the recent Burma Army offensive – the numbers are on the increase as Burma Army attacks have intesified in Karen State.