I first met cartoonist Harn Lay, 15 years ago in the northern Thai town of Chiang Mai. He was then working for the Irrawaddy magazine. I was impressed by his cartoons that never failed to skewer Burma’s military regime and wanted to write a feature about him and his work.

Today, the military regime still rules Burma with an iron fist. Poets, writers, lawyers, monks, artists, doctors, comedians, musicians, bloggers, politicians, activists and journalists have been hunted, arrested, tortured and jailed for for speaking out against the regime and its 1st February, 2021 coup.

During our series of interviews in 2006, Harn Lay, didn’t hold back in his contempt for Burma’s military hardmen.

Harn Lay said he detested Former General Than Shwe and his regime and it showed in the cartoons he drew for The Irrawaddy Magazine, Democratic Voice of Burma, Voice of America and the Shan Herald Agency for News. Harn Lay dismissed the generals with a cutting barb.

“Than Shwe’s a pumped up bully. I try to show how ridiculous he is, a little fat man in a uniform. His only power, his gun.”

Despite the humor, Harn Lay took his role as an artist seriously and said it was his duty to point out the emperor is naked, even when it is the so-called ‘good guys’.

“It’s like a responsibility. I stand by the victims of the powerful and the ruthless. I try to make people not only laugh, but to be aware of how they can be manipulated. Sometimes my cartoons have upset the pro-democracy and aid groups.”

Harn Lay, was proud of his Shan State heritage and explained he first tried for freedom by joining an ethnic armed group.

“When I was younger, I joined the Mong Tai Army (MTA) to fight for Shan freedom and independence. But it was an illusion. Khun Sa [the MTA leader] was power mad, the same as Than Shwe and other dictators. He was like a kid, no control, he wanted everything he saw.”

Harn Lay soon realized it was time to put down the gun and pick up his pen.

“The gun kills, the pen doesn’t. I tried to use cartoons to express my politics, the injustices people suffer and to make them laugh at the powerful – they can’t be too powerful if people are laughing at them.”

Harn Lay told me his intention was always to get under the skin of the ruthless and powerful dictators of Burma.

“Translated my name means a leaf that causes irritation and itching. I want to make these powerful generals uncomfortable, I want to show people what they are really like without the protection of their uniforms and I want to show they are mortal.”

Harn Lay says the cruelty of the Burma regime was never a laughing matter and was still drawing cartoons lampooning the generals until recently.

“Every Burmese person has been hurt or touched by their brutality. I’ve given up the gun, but I’ll keep drawing and try to expose this regime for the criminals they are.”

Until late 2021 Harn Lay was still lampooning the military junta and its generals in his cartoons. 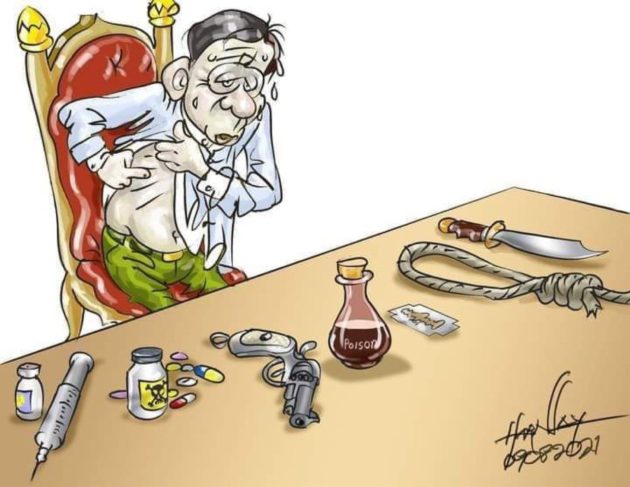 Harn Lay enjoyed the support of his wife Yuwadee and his daughter Wan Wan, but told me at the time they could be his harshest critics.

“I met Yuwadee 16-years-ago in Shan State. I test my work out on her for clarity. If she laughs, I know I’m on track.”

Harn Lay’s art has featured in a number of international exhibitions and he is the recipient of numerous awards for his work.