The displaced villagers are now forced to live in makeshift plastic sheet shelters on the banks of the Moei (Thaung Yin) River that marks the border between Burma and Thailand. Many of the makeshift shelters are set up on so-called ‘no-man’s land’ – patches of gravel-beds left in the middle of the Moei River as wet season flood waters subside. Most of the displaced villagers, who fled the Burma Army artillery bombardments and airstrikes, are now too afraid to return to their Lay Kay Kaw homes. 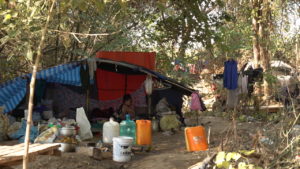 Community-based-organizations estimates the Burma Army attacks displaced more than 10,000 villagers from Lay Kay Kaw and nearby villages and as many as 4,000 of them fled to the Thai side for safety. After being hosted by Thai authorities and provided with basic needs for almost one month, the temporary shelter has been ordered to close.

Aid workers delivering food assistance to the displaced community at the Thai side temporary shelter at Mae Kon Ken village, in Mae Sot District, Tak Province, said it was permanently closed on January 28,.

Despite the closure of the Mae Kon Ken temporary shelter, more than 2,000 displaced villagers are still too frightened to return to their homes – some have continued to take refuge in border villages while others stay on the Burma side of Moei (Thaung Yin) River bank.

The aid worker (who asked not to be named) explained to Karen News how the the villagers’ are trying to navigate the dangers of the conflict, landmines, border security officials, trying to find temporary shelter on both sides of the border river, avoiding covid-19 and other infections like dengue fever and malaria.

“Most of the villagers did not return to their villages and instead decided to continue to try to find a safe refuge on the Thaung Yin (Moei) river banks on the Myanmar side. Some villagers went up-stream looking for safe shelters.”

A displaced villager from Lay Kay Kaw area said it was impossible to return to their home as Burma Army troops were camping in most villages, including Lay Kay Kaw, and had looted homes and killed and ate villagers chickens, pigs and ducks.

The villager said, “Nobody can return home now. The Burma Army soldiers are living in Lay Kay Kaw. They set-up at the Lay Kay Kaw administration office. They are also staying in houses at Mae Wah Khee village. They broke into and destroyed every house – how can I go back?”

Community groups said they are able to provide emergency help to the displaced villagers – basic shelters, food and non-food items, but now the displacement is over a month, villagers face other difficulties with inadequate shelter, lack of kitchen utensils and other household needs.

Saw Kelly, Deputy Director of the Committee for Internally Displaced Karen People (CIDKP), one of the community-based organizations delivering food and other assistance to the displaced villagers on the Burma side of the border, said makeshift shelters and current living conditions are not adequate for longer stays.

“In coordination with other Karen community groups, we have tried to secure and provide assistance to the displaced communities, although it is not a comprehensive service. As the displacement period is prolonged, there will be additional difficulties. For example, shelters, we provided plastic sheets that could be used as basic roofs or on the floor. The plastic sheets if they get wet by rain or by mist make uncomfortable living. Drinking water can also be an issue… despite many Karen community groups providing drinking water bottles, it is not enough, more are needed for the thousands of people. Other difficulties are to do with cooking meals. The displaced community are provided with rice and other basic food items, they often do not have pots and plates or firewood to prepare food.”

Saw Kelly said the current conditions can lead to health issues for the displaced villagers; a lack of warm clothes, sleeping on the ground with just a plastic floor, unclean drinking water had caused children to get diarrhea and other infections.

Community groups are trying to arrange better organized sites for the displaced villagers that will help to coordinate assistance delivery as the period of displacement looks like it will extend. 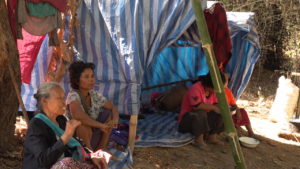 A Lay Kay Kaw displaced villager (who asked not to be named), told Karen News, “It will not be easy for us the longer the situation is allowed to continue, as we have all ages here, ranging from the elderly to children and infants.”

Despite an easing of Burma Army attacks in recent days, there are still many daily, small-scale armed conflicts as the Burma Army continues setting up frontline bases in the areas. Displaced villagers say as long as the Burma Army maintains its bases in their villages, they are unable to return home and have no alternative, but despite the hardship to try and find safety along the border.