The political situation in Burma had offered some hope for the more than 90,000 refugees living in refugee camps along the Thai-Burma border to return to their homeland. Beginning in 2013, some refugees made the decision to return to Burma on their own, while others decided to go back through the United Nations High Commissioner for Refugees (UNHCR) sponsored ‘Voluntary Repatriation Program’ offered between 2016 and 2020.

Most returnees said they made the decision to return because they believed the country political situation would improve and they could restart their lives back in their place of birth.

Their hopes proved to be short-lived. The military staged coup on February 1, 2021 and armed conflict in ethnic areas, have made the returned refugees insecure.

Maung Paul, a refugee who went back on February 2018, through UNHCR’s supported program, said returning to his ancestor’s land had always been his dream, but he is now worried for his safety.

“I came back to live peacefully in our country, but with the current situation, I don’t feel secure anymore and I’m worried for our life now.”

After returning, Maung Paul, was provided with housing in Lay Kay Kaw New Town, a new settlement of low cost housing built to accommodate conflict affected communities. This including displaced villagers, refugees and family members of the Karen National Union. The settlement was funded by Japan’s Nippon Foundation and is located about nine miles south of Myawaddy in Karen State.

After a ceasefire agreement was reached in January 2012 and peace talks started soon after, the Lay Kay Kaw New Town project was established in 2014, with a mutual agreement between the Karen National Union and the Thein Sein USDP government.

Peace talks were a stop start affair and finally stalled in late 2020. In late March 2021 armed conflicts increased between the KNU’s armed wing, the Karen National Liberation Army (KNLA) and Burma Army. The Burma Army attacks including airstrikes, forced 20,000 Karen civilians from their homes in northern Karen State and as many as 3,000 tried to cross the Salween River to safety in Thailand. 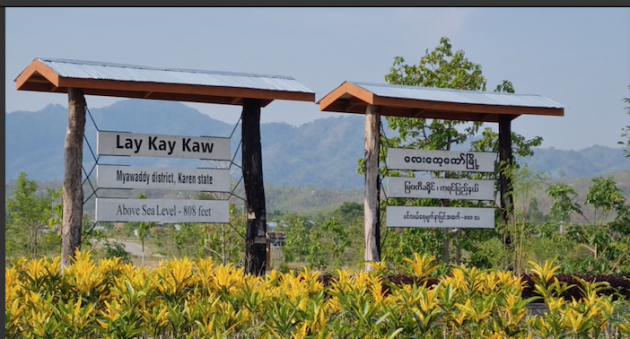 By early April, 2021 Lay Kay Kaw New Town was under the scrutiny of local military troops based in the area. KNU officials, who oversees security for the new town denied, a request for militia sponsored by the Burma Army to enter the settlement. In the first week of April, armed helicopters flew repeatedly over the new town causing fear airstrikes would follow as happened in other parts of northern Karen State.

La Kine, who returned from Umphiem Mai refugee camp and is now living in Lay Kay Kaw New Town told Karen News the military coup had made it hard for her to restart her life back inside the country.

“We didn’t feel free when we were in the refugee camp, we came back with the hope of living a peaceful life. Now with the military coup and helicopters flying over us, we live in great fear – there is no more hope of a peaceful life for us.”

“We don’t have good sleep at night. We worry about conflict and finding stable work. This is not what we expected.”

Since early April 2021, residents in Lay Kay Kaw are taking it in turn to guard their new town, especially young people are volunteering, both during the night and day.

Nwe Nwe Win, a student returned three years ago from the refugee camp said the situation at first, when she first arrived back, was fine, however, the current situation is of concern to her.

“I lived peacefully and did not have any problems when I came back to Lay Kay Kaw. But now, we are worried for our safety because helicopters are flying [over] us and it is scary. We do not get enough sleep at night because we have to be on guard duty for our security. Children also cannot go to school.”

Saw Htoo Say living in Lay Kay Kaw said he trusted the Burma government, so he decided to return.

“I no longer trust the government. This military oppresses the people and took the power. Each day, I am thinking how to run away for my safety – this gives me a great fear. I cannot sleep thinking about it at night.”

Saw Htoo Say said when thinking about his experience in the past he is scared and he fears what he could be facing in the future.

“I don’t feel safe to live each day because I’m scared to think about all these things. But I do hope for a better situation in Burma. I want to live in Burma, but if the situation is getting worse, I don’t know what I’ll do.”

Since UNHCR in collaboration with the Royal Thai government and Burma government launched the voluntary repatriation program in 2016, more than 1,000 refugees from nine camps on the Thai-Burma border return to Burma. According to organizations working on refugee issues, nearly 20,000 refugees and IDPs have returned home on their own.