Young protesters were physical abused when arrested. Images recorded by protesters show police bursting into rooms and dragging young women protestors out by their hair as they took them away. 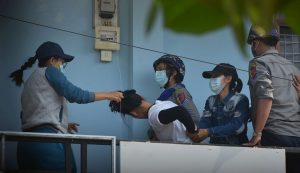 Khaing Phyo Maung, a teenager who was arrested on the day, but released later, after signing a ‘commitment not to be involved in such acts again’, spoke to Karen News about his arrest.

“After we were shot at by tear gas the police moved into the crowd. We ran into a small lane. Two people in plainclothes followed us and tried to arrest us. As they were in plainclothes, I didn’t know who they were. I had the right to defend myself, so I kicked one of them. They punched me back in the face cutting my lip. Then after they put me in their truck and closed the door they punched me three times.”

The arrested protesters were immediately taken to Hpa-an’s Tuangkalay prison. On March 2, 15 underage teenagers were released.

In Kawkariek town, 11 protesters were arrested and 10 of them were women, including two teachers.

Bo Bo, a protest organizer, who witnessed the arrests of the two teachers described to Karen News what happened.

“The took the two teachers and put them in their trucks. Protesters demanded the release of the two teachers, but the police refused and instead fired their water cannons at the crowd. The water cannons was ineffective so they fired weapons and tear gas into the crowd and began arresting more people – the protesters then scattered to find safety.”

In the Thai-Burma border town of Myawaddy security forces arrested at least 10 people as they gathered in front of the No.1 Thai-Myanmar Friendship Bridge.

The Assistance Association for Political Prisoners, estimated that as of February 28, a total of 1,132 people have been arrested, charged or sentenced in relation to the military coup on February 1. From February 1 to the 28, approximately 30 people have been killed due to the violent and arbitrary crackdowns.