Before and after the 2021 coup, KNLA brigades had policy differences, and the DKBA (Karen Buddhist Army) and the KNLA-PC are breakaway factions from the KNU, who at various timeshad been bitter enemies.

Padoh Saw Hla Tun the KNU’s General Secretary number 2 told KIC “ This meeting was held with the aim of informing the people about the political policies and processes currently practiced by the KNU, the political objectives of the KNU, and rebuilding unity from the differences between the Karen people”.

The Hpa-An District Chairman explained to the public about KNU’s position, political processes and policies during the nearly 2 years afterthe coup. This kind of meeting was held for the first time since the coup, KNU said.

1500 People from Hlaingbwe, Paingkyon, Htilon, Nabu, and Donyin, 5 townships within the control area of Hpa-An district of KNU attended the public meeting held on November 11.

The leaders of the various Karen armed groups , who attended the ceremony openly discussed their own views and opinions about the political and military situations after the coup. The Karen Forces Unity Committee was established on May 28, 2013, formed with 17 individuals from various organizations with the aim of preventing conflicts between the Karen armed groups and cooperating in the fight against drugs.

A person who attended the forum but did not want to disclose his identity told KIC, “This is the first time that the top leaders of various organizations and the grassroots were able to meet. We shouldn’t have too many high hopes for the meeting yet, because in the 5 years since the NCA was signed, the leaders have not been in contact with the public.” 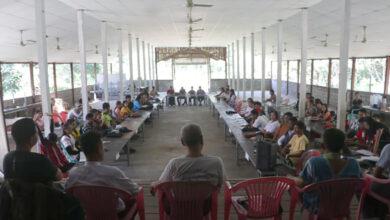