Ma Zin Oo, 33, was cooking in the kitchen, located at the back of her house, when an artillery shell exploded near a banana groove behind the house. A villager said the explosion killed Ma Zin Oo and her seven-year-old daughter sustained a head wound.

The villager told Karen News. “Ma Zin Oo was cooking at the back of the house when the artillery explosion killed her. Her daughter was badly injured and is now in hospital. They [Burma Army] fired all night. This morning, they fired both light and heavy artillery. The daughter doesn’t know what happened to her mother yet. She only knew her mother had been hit by an artillery shell when she called.

The Burma Army and its militia, the Border Guard Force (BGF) 1021 joined with its Kha-Ya-La Battalions 284/32, stationed inside the police station in Tagundaing village. The combined forces had been firing light and heavy artillery every night. Local villagers said the public access road, the Win Yay Highway, that runs in front of the station had been closed to traffic.

Khale-Tagundaing division is in Win Yay Township, a KNU administrative area, and nearly 10,000 local people from about 10 villages had fled after fighting between the military-appointed Atate Administration Council troops and the KNU on April 23rd. The displaced villagers took refuge in other towns, villages, and mountains.

Villagers attempted to return to their village, but they had to run again as the war spread to nearby areas. Villagers and aid workers explained the shelling and shooting is now daily, and those 10,000 displaced villagers now face severe health problems and food shortages.

On April 23rd after heavy Burma Army artillery shelling, a woman and a man were killed in Tagundaing village.

Villagers said at least 10 villagers were wounded when forced to be human shields. The villagers had been arrested when passing the police station. They were beaten, threatened and used as porters to carry supplies and as human shields. 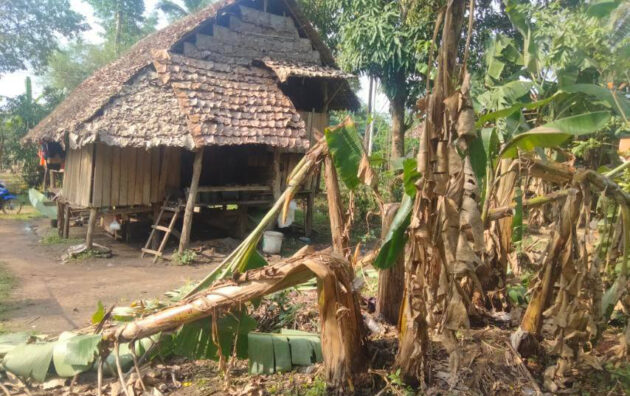