As far back as 1949, civilians have suffered at the hands of the Tatmadaw [military]. When the country opened its borders and declared a democratic transition, civilians hoped the situation would get better, but that has given way to disappointment as the Tatmadaw continued its abuses and horrors. Respective ethnic and civilian political leaders tried to fix the problems in different ways: leading resistance fights, using political means, signing the National Ceasefire Agreement, and negotiating for peace.  Local community organizations and civil society organizations, individual activists and advocates in the country, as well as abroad, advocate for basic human rights for the people of Burma, but the military still persecutes its civilians on a daily basis. It is time for the local people to rise up and demand their rights to live, work, and service in their own respective villages. That is what they are doing now.

On August 6th, 2020, three protest leaders were arrested for leading a community protest for the murder case of Naw Mu Naw in Nyaunglebin, Hsaw Hti township. 206 villagers from 16 villages located in the Karen National Union controlled areas in Nyaunglebin district demonstrated in four locations. Their plan was to start from Sa Lu Chung, continue on to Don Zarit and Kyoe Chung, before heading to Gway Hseit. However, when they arrived at the third village called Kyoe Chung, the Burma military confronted the protestors. Ultimately, three community leaders, Saw Eh Noe Star, Saw Kyi Win and Khin Aung Tin were arrested. The arrests of these three men is just another example local communities continue to suffer at the hands of the Burma Army. While peace and justice may seem beyond their reach, the local community needs to take matters into their own hands. The civilians know they have to take the risk and put their lives on the line, but with courage and resilience, they will be able to stand up for themselves.

On July 16, 2020, two Burma Army soldiers shot and killed 40-year-old Naw Mu Naw after stealing her jewelry in Mutraw district, Karen state. The murder sparked outrage in the Karen community, prompting the Karen National Liberation Army to send a letter to the Karen State Joint Ceasefire Monitoring Committee underlining the Burma Army’s violation of both the Military Code of Conduct and National Ceasefire Agreement. However, the Burma Army’s long history of committing atrocities unchecked offers little hope of justice for local villagers – Naw Wah Ku Shee of the Karen Peace Support Network said, “The Burma Army committing crimes with impunity in Burma has been ongoing for decades. We have seen situations in the past where action was not taken against the perpetrators. The army continues committing crimes with impunity.”

This unprompted and unnecessary violence on the part of the Burma Army follows a steady increase of militarization in northern Karen state. Local people have stressed the Burma Army’s military bases cause villagers to live in fear and restrict their ability to freely move and farm. The prolonged presence of violent soldiers combined with the recent killing of Naw Mu Naw was enough to spark protests amongst thousands of ethnic Karen who have long suppressed their fear and anger with the Burma Army’s systematic impunity.

Local communities began organizing in the Khu Thu Hta village tract on July 22 – more than 1,500 gathered for peaceful protests to urge the withdrawal of Burma Army posts from their villages. On July 28, protests grew to 4,600, with demonstrators protesting outside the army outposts. The protests represented 114 villages in the Hpapun District. Since January, the Burma Army has killed five civilians in Hpapun, including Naw Mu Naw. Although senseless abuse from the Burma Army is not a recent development, Karen villagers’ response in protests represents a gradual increase in demonstrations from long-persecuted ethnic groups.

In 2017, Kachin state locals from more than 20 villages attended a Farmer’s Day demonstration to protest against land-grabbing in the Hukaung region that resulted in the loss of over 270,000 acres. More than 70 % of Burma’s population makes its living from farming- the dependency on farmland to both generate income and survive day-to-day prompted villagers to “express their feelings about losing our land,” as voiced by a farmer from Warazut village. Land confiscation and illegal land grabbing sparked a similar collective response on June 2020 in Shan state, where 900 acres were ‘taken’ by the Burma Army in Hsiheng township. Following this land-seizure, the Burma Army then charged 70 farmers with trespassing and took their tractors, causing Pa-O farmers to stage a protest on June 2.

In addition to protests against unjust land theft, demonstrations from locals have manifested in different ways – similar to the protests sparked by the death of Naw Mu Naw and when Burma Army troops shot and killed a man and wounded two in northern Shan State in late June 2020. Following this, more than 10,000 protestors in Kyaukme township, Shan State, marched two miles through the town demanding compensation and justice for the man who died. Recent Shan State protests in response to land-grabbing and the murder of a civilian, Kachin state demonstrations against land confiscation, and the recent Karen state protests all indicate an increase in the expression of collective anger and exhaustion with the Burma Army’s violence towards ethnic people.

As the Burma Army continues to run largely unchecked throughout the nation’s ethnic states, it is a positive sign that indicates a trend of vocal and physical resistance is occurring. Burma’s ethnic civilians’ recent actions and protests against the Tatmadaw’s inhumane abuses with impunity is just the beginning. The ethnic groups of Burma deserve to make their voices and demands heard, especially those impacted directly by the Tatmadaw. Civilians are demanding accountability for the Burma Army’s violent actions and are actively documenting their consistent abuses and wrongdoings. Such courageous actions should be, and hopefully will be, seen more often in the near future in order to show the world that ethnic civilians are not going to tolerate the Tatmadaw’s heinous crimes anymore. Civilians and grassroots organizers across the world should stand in solidarity with protesters in Burma by continuing to educate themselves and those around them on the daily plight of the ethnic people living under constant oppression from the Burmese government and Burma Army.

*Myra Dahgaypaw is the Managing Director at the United States Campaign for Burma and she can be reached at myradah@uscampaignforburma.org 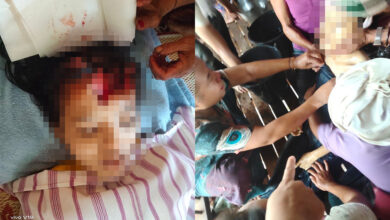