Plans to turn rice fields running from the River Moei up into the Dawna Mountain Range into a giant construction site of large concrete houses, apartment blocks, casinos and an international airport are causing concerns for Karen community groups. The grand plan to turn thousands of acres of Karen land surrounding the small village of Shwe Koko into a mega complex housing hundreds of thousands of people.

The mega project is causing concern among indigenous Karen people who see it as a threat to their security. The local Border Guard Force secured much of the land by forcing villagers off and confiscating it. A new report – Gambling Away Our Lands – by an alliance of Karen community groups, raised a number of serious allegations about who gains from the project. 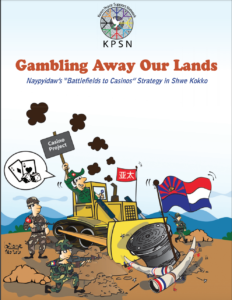 The Karen Peace Support Network said “the Shwe Kokko project will have no benefit for local Karen people, and will serve only the interests of transnational gambling mafias and Burma’s ruling military.”

A KPSN spokesperson, Naw Wah Ku Shee told Karen News the project has no benefit for Karen people and had devalued the peace process.

Naw Wah Ku Shee questioned why the government made the decision to ‘sell’ Karen lands to an international gambling syndicate.

“This project is agreed to and implemented by Nay Pyi Daw (Burmese government), we don’t want our land to be taken and sold to anyone, including Chinese gamblers. They have taken advantage of the ceasefire and the Burma Army has used it to expand its operations and troops into Karen controlled territory.”

The KPSN report reflected Naw Wah Ku Shee’s concerns and said the “core industry of the Shwe Kokko “New City” project will be – and already is – online gambling.”

KPSN said the company running the project, Yatai IHG, “appears to be just a front for a regional on-line gambling operation, who have made their fortunes from similar ventures in the Philippines and Cambodia. They do not appear to have any formal links to the Chinese government, but are hand in glove with the Burma Army authorities in implementing the project – outside regular legal frameworks.”

The KPSN report accuses the Burma Army off being the real winners in the Shwe Kokko mega complex, “…without firing a shot, they will cement their control of this strategic border area, which they wrested at bloody cost from the KNU (Karen National Union) in 1995. Military elites will also be sure to earn a hefty share from the vast illicit profits generated.”

KNU general secretary, Padoh Ta Doh Moo explained to Karen News the mega project was not based on Karen community needs and none if any consultation was taken with local communities.

Padoh Ta Doh Moo told Karen News, “The KNU do not accept mega development projects costing billions of dollars that are of no benefit to our community. We are now against any mega project and our position is that no mega project should be implemented while we are in the ceasefire period and are working towards a peace agreement.”

“We are concerned about this [Shwe Kokko New Town Project], this could hurt our Karen sovereignty and the sovereignty of this country. There needs to be a space created for every stakeholder to have a say – not just international investors, the government and the military. This is a major national issue. We need to have prior discussion on national issues before they are implemented.”

KPSN said a major concern is the potential for Shwe Koko to attract organized crime syndicates to the area. “The project will have little benefit for local Karen people. They will be displaced off their land, with few job prospects in the new development. Based on the experience of similar Chinese casino “SEZs” in Laos, the area is also likely to become a hub of criminality, drug trafficking and money laundering – which will make the development inherently unsustainable, as in the case of the abandoned ‘Golden Boten City SEZ’.” 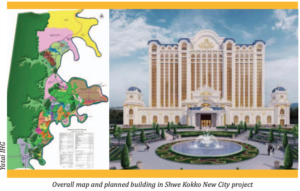 Shwe Koko has generated an enormous amount of media speculation and links of the project to the China government’s Belt and Road Initiative, but the KPSN report raises questions that the reality is different.

“The investors claim that the project forms a key component of the Chinese government’s Belt and Road Initiative (BRI), but analysis of evidence from the ground and the investors’ promotional material reveals a more sordid reality.”

KPSN point out “… the core industry of the new complex will be – and already is – online gambling. The investing company, Yatai IHG, is posing as a legal business entity, but is simply a front for a regional on-line gambling operation, who have made their fortunes from similar ventures in the Philippines and Cambodia.”

KPSN point to the lack of “… firm evidence to back the company’s claims that the project forms part of China’s Belt and Road Initiative – only distorted maps and exaggerated links with officials. Given China’s public crusade against online gambling, it is highly unlikely that the project in its current form would receive official Chinese government support.”

KPSN said the “murky legality of the venture has not, however, prevented it from receiving high-level backing in Burma. A project of such huge cost and scale could never have progressed this far without the formal approval of the Burma Army.”

KPSN explained in the report summary how the “Burmese military spokesmen have tried to place sole blame for the project on Karen BGF leader Chit Thu, but this is disingenuous, given the BGF’s total subordination within their ranks.”

KPSN said “there can be little doubt that before proceeding, the investors reached an agreement with Naypyidaw top brass, involving substantial kickbacks. For Burma Army leaders, the project is a win-win: cementing control of this contested Karen territory, while gaining huge financial rewards.”

KPSN said the mega project highlights the current peace process is nothing more than a sham. “The Burma Army have no right to sell off a vast tract of contested Karen territory to foreign speculators before a peace accord has been reached and a new federal constitution actualized, which grants local communities rights to decide over their own lands and resources.”

The KPSN report explains the mega project has gone way past its official application to the government.
“The only formal permit granted for the project by the Myanmar Investment Committee was for construction of 59 luxury villas on 22.5 acres of land, and this had been far exceeded.” 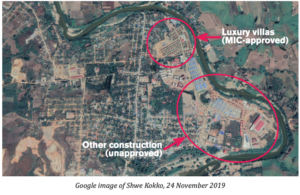 A proposal by the investment group and seen by Karen News confirms KPSN allegations and indicates the mega project is planning on using 180,000 acres.

Shwe Ko Ko, currently sits on the banks of the River Moei that separates Thailand from Burma, and is home to the Border Guard Force under the command of the Burma Army.