Displaced people from Lay Kay Kaw village, who had been forced from their homes by Burma Army and its sponsored BGF militia, said it was only possible to return to their home if all troops under the command of the military-appointed State Administration Council were withdrawn.

A villager who attended the meeting told Karen News, “We dare not go back. We know the BGF and the Burma Army are still on the Pagoda hills and in our houses. I will only go back if all of them leave. Villagers can’t go back if there are soldiers.”

The villager said BGF General Secretary, Colonel Saw Chit Thu responded to the villagers concerns by claiming they would work on withdrawing their troops and that he would take responsibility for about removing 70% of his troops.

“Maung Chit Thu said that he would take responsibility, but how can our people believe that if they cannot show proof? We have to consider what they say carefully, we have already suffered for many years now because of the Burma Army.

At the public meeting villagers in the Palu area were asked by the militia’s to return to their homes, start planting crops again, and send their children back to school.

Notably the militia leaders failed to discuss who would be accountable and responsible for the loss of income villagers suffered from the forced displacement. Villagers also said they were concerned about their village security and the constant danger from landmines. Villagers said the Burma Army, the BGF and the DKBA were not interested in what the villagers were concerned about and were only intent on delivering their message. 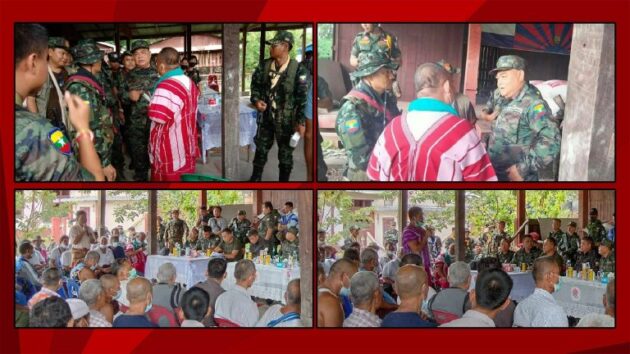 A villager said they ordered us “to go back to our homes, farm, and return to school. We know they hide in our villages because of their fear of being attacked. They think they won’t be attacked if villagers are there. When we asked about our security, they did not guarantee it. Nor did they take responsibility for their mines they put in our homes and farms.”

The meeting was attended by as many as 300 soldiers troops under the command of BGF General Secretary Colonel Saw Chit Thu, DKBA Commander-in-Chief General Saw Steel and the Burma Army under the control of the State Administration Council – more than 100 villagers also attended.

Issues discussed at the meeting focused on local displaced villagers from Palu Gyi and Mae Htaw Thalay villages being ordered to return home, State Administration Council schools to reopen, students to be enrolled, and crops to be farmed again.

Villagers who attended the meeting said no guarantees were made for the resettlement of IDPs from places where there was ongoing conflicts around Lay Kay Kaw, Htee Mae Wah Khee, Yathit Gu, and Thay Baw Boe region between the Burma Army, BGF and the Karen National Liberation Army.