Ahead of the new NLD-dominated assembly, six newly elected MPs from five ethnic parties speak about their aspirations, what alliances they will form, and what drives them.

YANGON (Myanmar Now) – The faces of Myanmar’s new Parliament, when it convenes in Napyitaw on February 1, will be almost unrecognisable when compared to the previous assembly.

Few old faces have clung on and the green of the Union Solidarity and Development Party will make way for the red of the National League for Democracy. Former teachers, engineers, social workers, poets and musicians will take the place of the stalwarts and former members of the old regime and those with experience in office will be replaced by those have little.

Whether this Parliament will bring a period of progress on ethnic issues remains to be seen. How will the ethnic party MP’s make sure their voices are heard over those of the overwhelming NLD majority? Myanmar Now spoke to six newly elected MPs from five ethnic parties about their parliamentary aspirations, what alliances they will form and what drives them. 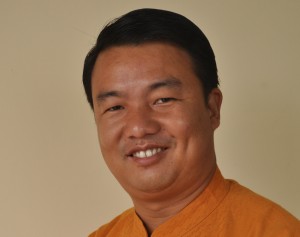 My background is as a social worker. I worked with young people on issues such as education and drugs. I feel the young people are the future of our nation. Every issue should be about our youth. The drug issue is very sensitive in our areas. Some places have no rule of law, the government cannot control these areas and now they’re under the military or militias. Our people have no drug education and it’s a problem.

We need to let the MPs from the Burmese majority understand how the ethnic people have been suffering in the past. In Parliament we won’t be able to work by ourselves, we will have to work with them and advocate, and allow them to understand what the needs of the ethnics are. Some issues are majority issues and if they suit us we will support them.

The new Parliament is not a dictatorship, it’s a democracy. Laws like the Land Law and Education Law, and the peace issue affect us too so if they come up we will support them. It’s not only about the needs of ethnics. We’ll quickly learn which NLD MPs are the smartest and who have the best communication skills and we’ll seek to work with them. 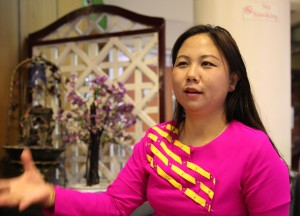 Nan Moe, 32 ,Ta’ang National Party, Lower House, Manton constituency, Shan State:
The most important thing is peace. I won my constituency but if you don’t have peace we wont be able to achieve anything so peace building is the most important thing for the new government. In 2013, I joined the TNP because I realised that it’s better to hold a pen and try for peace than a gun, so I knew I had to go into Parliament.

I haven’t experienced gender equality since I was a child so I’m not afraid of anything.

Sex and gender equality and overall equality is important to me. From what I’ve seen over the last year, we don’t have equality in this country. Even in my party, there’s only three women members in the CEC (central executive committee) out of 65 members! That’s not a parliamentary or party issue, it starts in our homes. In our families, in my constituency and amongst our people they differentiate between girls and boys from a young age. There aren’t enough educated women now. I have to change this. Not only men can become leaders.

I have to work with the NLD, where our policies are the same we must work together. Our policy is also democracy. I’ve got many friends within the NLD and I’ve already decided that even though I don’t have the same influence as the NLD MPs I will learn from them. I don’t have any experience in Parliament right now, it’ll take about one year for me and others to build up experience. 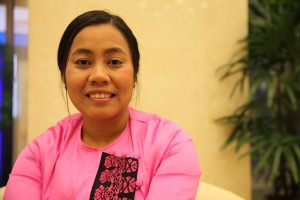 We must establish rule of law in this country. We have to decentralise power, and regional and national governments must establish taxes. Also our education system is really weak. In most ethnic areas we don’t have equality of education access so many young people are leaving their homes. Like me, I was born in Rhakine but I moved to Rangoon when I was 14 with my family for a better education. In Mandalay and Rangoon the education standard is so different to ethnic areas. We have to invest in education and our youth. I believe the youth can change the world.

I believe in collective power and collaboration, but I’m also concerned because most of the seats in ethnic areas went to the NLD, especially in the Upper House, so when we’re working for federalism most of the signatures will be from the NLD. These MPs have to respect NLD policy, but I’m concerned whether they will work for NLD’s policy or for the needs of ethnics. 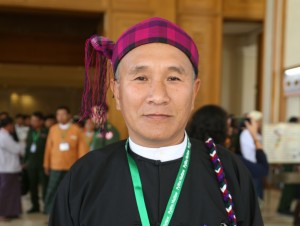 I think the Myitsone dam project is a big issue for the next government. There is the potential for conflict between the NLD government and us, the native Kachin people. Since the beginning, the Kachin people haven’t accepted this project at all and if this project resumes or hasn’t been stopped indefinitely, there will be a problem between us and those who allow it to go ahead.

Another thing is the way natural resources are managed among central and state governments. I accept that it’s not going to be easy for the next government to manage resource sharing because it’s a complicated issue tied to the 2008 Constitution. But I think there is a way to work something out.

In the last Parliament, ethnic parties had no chance to make laws for the benefit of their states because it was dominated by the UDSP. In the 2015 election the people gave the NLD the mandate to lead the country so I look forward to working with a government that will take the needs of ethnics into consideration when making laws. If we, ethnic parties and the NLD, can collaborate, the legislature will be much stronger. Nevertheless, there are differences in policy between the NLD and ethnic parties. I’m concerned the NLD MP’s could object to our proposals as they don’t know what’s best for our states. 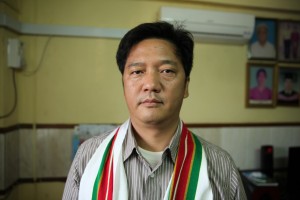 We have a lot of responsibility. We’ve been elected by our people. The last governments weren’t reflective of the people but this time it’s different. Our ethnic areas are very poor, they lack basic health care facilities as well as many other things so development of these areas is a major issue. My focus for my area is building roads and providing electricity for my area. In five years’ time I hope I can say my constituency is more developed than before I was elected.

My background is as a social worker. When I was studying physics at university I worked for a Zomi Citizens Student Union and from then on I moved into social work. Before I was in politics I kept thinking ‘how much money do I need to help these people?’ But in politics, you don’t need to think like that. Now I’m an elected MP I can do it through the assembly.

In Chin state, the NLD has 12 seats and Zomi only has two, so of course we must work out how to share with them. Even though we are the minority, we still must stand for our rights and the needs of our people in the assembly. We were chosen to represent our people so we will be there as a voice for them. 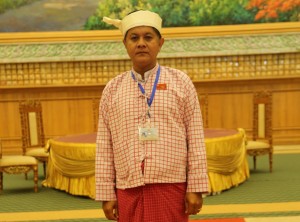 There are coal-fired power stations being built in Mon state, particularly in Ye Township, and this is something that the Mon people don’t support. I’m the only Mon National Party representative in the Union Parliament so I will be bringing this to national attention. I aim to draft a proposal to stop these coal plants and I’m going to be asking fellow Mon MPs for their support. I think that all the NLD Mon MPs feel the same and will support me on this motion.

The Mon National Party is a member of United Nationalities Alliance, which is a coalition of ethnic parties in an informal alliance with NLD. This means it shouldn’t be difficult to co-operate with the NLD when creating and passing legislature.

I’m optimistic about this Parliament. The NLD will lead the government and I’m confident that they will push for the rights of ethnic people because they care about ethnic issues, unlike the USDP regime. So it will be an improvement on the last Parliament.

*This article first appeared on Myanmar Now on 29 January 2016